As the Kingma State foundation, we have uncovered a treasure trove of early family history, which we would like to share with you. About twenty years ago, we embarked on a quest to find our ancestors, starting from our branch of the family tree. We knew relatively little about the family at first, and we had not been left much. As we explored and collected everything we could find, we came across the oldest known Kingma, Jelle Kingum, who lived on a Sate (farm) with that name in the area around Franeker in the 15th century. We continued by tracking the history of the early Kingmas and their Sate, which grew in size over time and became the Kingma State in the 17th century. In the 18th century onwards, this estate was acquired by the Van Beijma family, which later changed its name to Van Beijma thoe Kingma. In the middle of the 19th century, this estate spanning more than two hundred hectares was sold along with the manor, after which all buildings on the property were demolished. The vast majority of the more than two hundred old Frisian Staten disappeared at approximately the same time.

We would love to share more about the former home of our ancestors and our cheeky, yet advanced plans to restore the estate to its former glory. We’ll also tell you how you can stay at the resurrected Kingma State yourself and explore the surrounding area, where the Kingmas have left many traces.

First, let’s take a brief trip back to the 19th century.

Kingma State in the 19th century

We had not been researching the former State for long when we discovered in the Fries Museum this beautiful watercolour made by Leeuwarden draughtsman Albert Martin. Most likely, it was made just before the State was demolished in 1864, probably by order of the then recently founded Fries Genootschap (Frisian Society) which had many of the disappeared States listed as Frisian heritage. A very thoughtful move by this group of Frisian dignitaries. State-resident Julius Matthijs van Beijma thoe Kingma was one of the founders of this group. In a copy of the Leeuwarder Courant newspaper published at the time, we read that the estate was widely known as “a very beautiful building with exquisite gardens”. At the same time, an unknown photographer took an intriguing photo of the State. Intriguing because it proved beyond a shadow of a doubt that Martin had drawn the building rather accurately and because it also features vague, unidentifiable human figures (where they residents, staff?). This photograph is owned by the Van Beijma thoe Kingma family.

Can we resurrect Kingma State?

In 2000, celebrated in Friesland as Simmer 2000, we had the brainwave of inviting as many Kingmas as possible from all over the world to return to their ancestral lands, the location of the former Kingma State. We organised a large event for family members on the grounds of the State, which was attended by more than 400 Kingmas from all over the world.
At that family event in 2000, we also conceived the idea of rebuilding and redesigning the estate. We were in love with the idea of establishing a place to live on our family land once more, where Kingmas from all over the world could come back to their roots and where they could enjoy a holiday home on their ancestral land in the peace and quiet of the Frisian landscape. A family home from where they can explore the surrounding area, such as the gatehouse in Kingmatille and the old family graves in the beautiful Regina church in Zweins. Of course, no visit to the area would be complete without seeing the monumental city of Franeker, as this former capital of Westergo is just a few kilometres away and is home to many traces of the Kingma family, as well as the world-famous Eise Eisinga Planetarium.

We have already made considerable progress towards reviving our old family estate. After years of planning, creating support among the local community and the government, and long urban-planning processes, the preparatory phase is now in full swing. In 2007, we were able to acquire eight hectares of the former State in one fell swoop, for which we set up a second foundation, Herstel Kingma State (Restore Kingma State), which came to own the land. We signed a cooperation agreement with our neighbours, Staatsbosbeheer (the Dutch National Forestry Authority), who own a two-hectare forest on the site that used to be home to the house and the gardens. Our plans to rebuild these ten hectares are now at an advanced stage, and our initiative is supported by the locals of Zweins/Kingmatille, Franeker city council and the province of Fryslân.

The core principle underlying the plans is our ambition to reshape ‘tradition’, i.e. to build a monument of the 21st century, not a monument of the 19th century.
We made the deliberate decision to avoid a historical approach by simply copying the old State and opted instead for a powerful yet appealing modern design, naturally inspired by the historical style and allure of the building that stood here in the 19th century. Kingma State is just over an hour's drive from Amsterdam and fifteen minutes from Leeuwarden. It is just a few kilometres - just fifteen minutes by bike - to the historic city centre of Franeker.

Our plans include the construction of a new family manor, flanked by two wings that are home to a total of eight houses around a sheltered courtyard, which can serve as a secluded sanctuary in the midst of windy Frisian country. All eight houses in the wings have their own garden and will be sold to candidates within and outside the family.
The proceeds from the sale of the eight houses will contribute to the costs for redeveloping the surrounding estate. Running costs for the estate will be paid from the returns of the exploitation of the farmland and the rental income for the family manor.

Regarding the redevelopment of the park landscape, landscape designer Van Gessel said: “The State and the surrounding park should form a whole. This will make Kingma State a new green anchor in the beautifully open and agrarian Frisian landscape.” 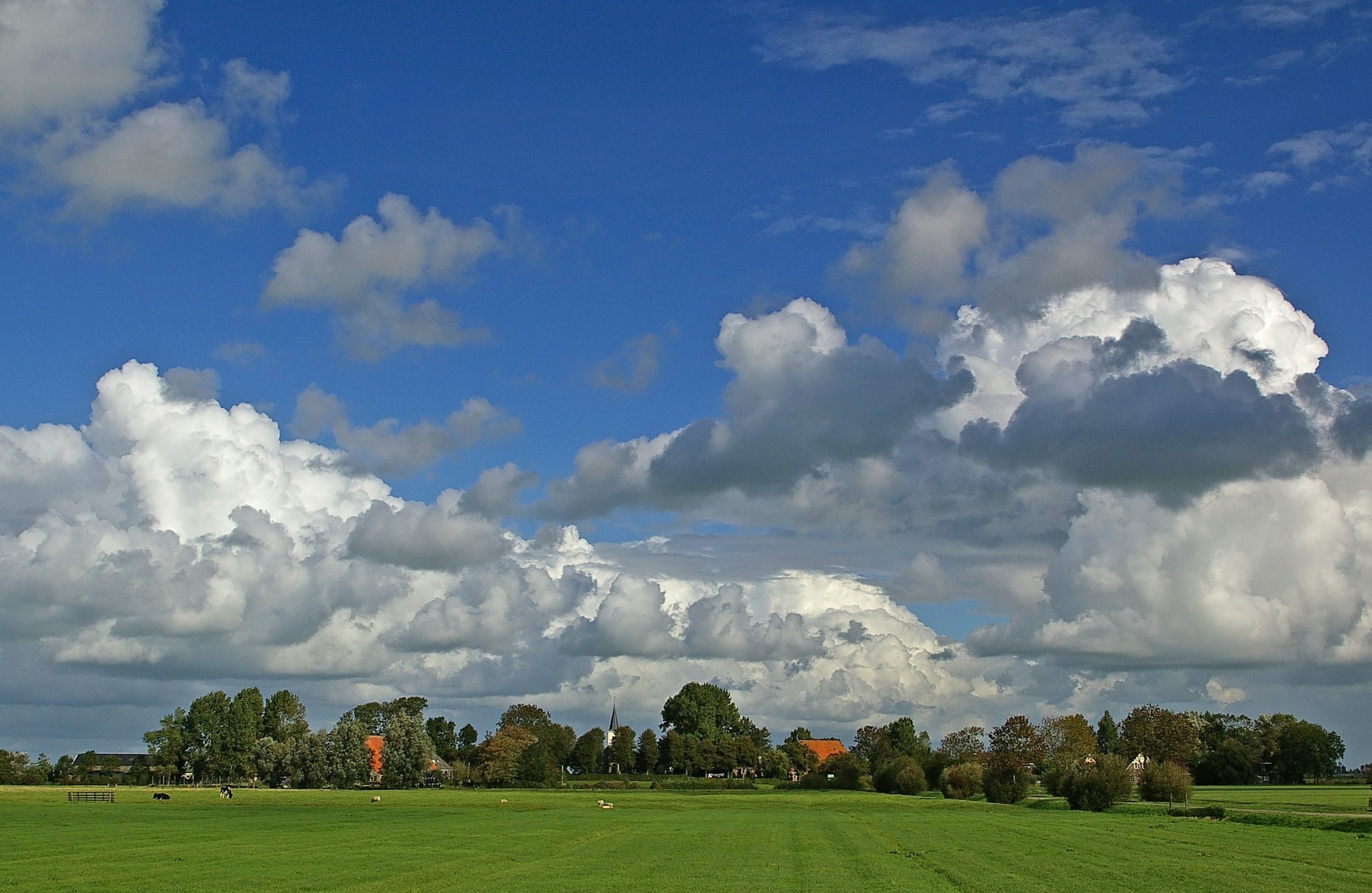 During the design process, we arrived at a harmonious ensemble of the centrally located main house, flanked by homes in two wings around the courtyard, situated on an island on the site of the former ‘Kingum’ mound. The new State will be surrounded by a park landscape with gardens, water features, woods and meadows that will be open to the general public. A driveway lined with avenue trees will lead through the forest to the south of the mound to give access to the State on the island, which will remain private.
In sketch form, the plan of the State and the surrounding park landscape will look as follows. 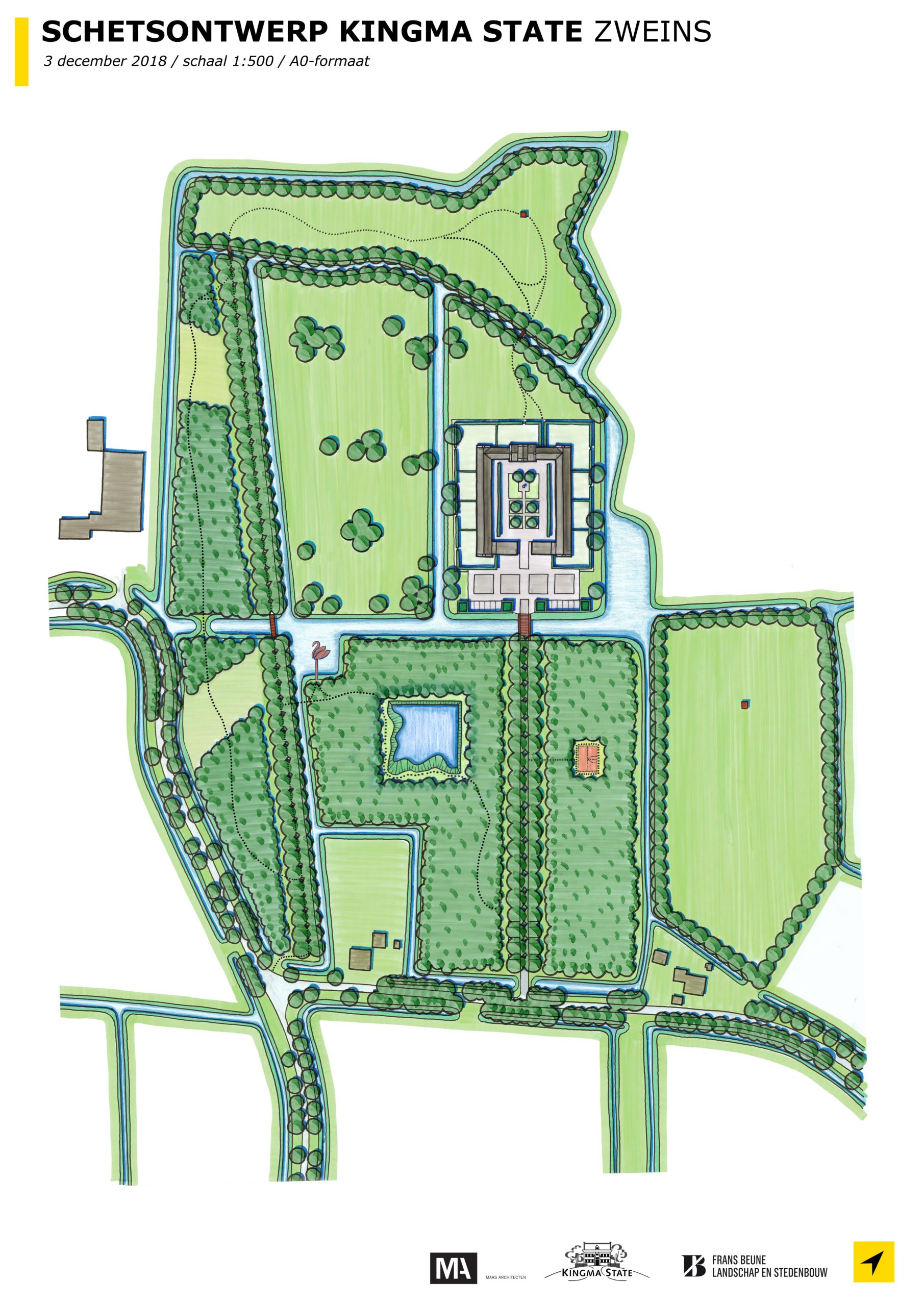 Traditionally, a landowner does not give up his land easily. For us, this means that the Kingma family will always be involved in the welfare of the renewed estate: as the owners of the land1 and the family house and as the managers of the estate. The owners of the island homes will be responsible for the upkeep of their gardens, whereas the family management foundation and residents will jointly own and manage the common land on the island.

We would like to involve the next generations with the management of the estate as soon as possible, so that they can also enjoy a renewed bond with their ancestral land. In times good and bad, because both are part and parcel of tradition, they will pass on the estate from one generation to the next. To find out more about how we plan to do so, stay tuned for our next newsletter.